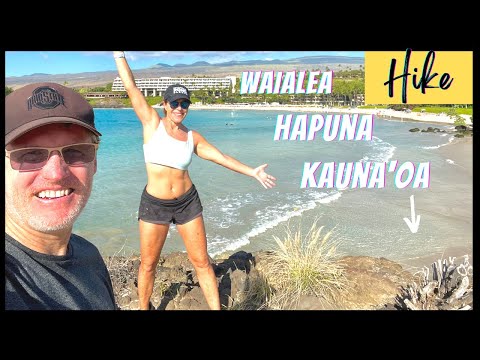 Making a Point About Public Beaches With a YouTube Video

A friend tipped me off to the fact that she has tried numerous times to get past the guard shack to be able to park at the Mauna Kea Resort to gain beach access. And each time, she got turned away and told the beach parking was full. Then I posted about that on my 365 Things to do in Kona page and MANY people had had a similar experience. So, I decided to make a video to show people how to get to the beach by the path coming over from the Hapuna Beach Recreation Area. We first titled the video “Best 3 Beaches” and then the “Enough Tourism Already” group got mad at us for promoting the beaches, so we went back to our original spin on just the hike..and I explain our purpose in the video. And the general purpose is NOT to promote tourism, but to let tourists AND residents know that our beaches are PUBLIC PROPERTY. If you buy a home here, you will see the value in this as you can hike the coast, even in front of million dollar homes in South Kohala. I am a big private AND public property advocate. If you don’t advocate for one or the other, you can lose those rights by sheer apathy.

So, here is the info about the video below..but know that it really is a wake up call to keep an eye on the resort, as it continues to put private lounges further and further down the beach.

Looking to see three of the most beautiful beaches on Hawaii Island? The three are conveniently connected by the ancient Ala Kahakai Trail in South Kohala on the Western side of the island.
As place names are an important part of Hawaiian culture, the beaches are Waialea Bay, Hapuna Beach and Kauna’oa Bay. You may find these popular beaches in your guide books as “Beach 69” “Hapuna” and “Mauna Kea beach”.

All three have beautiful blue water, fantastic for swimming (during calm conditions) and can be accessed legally from the hiking trail. I say this, because people sometimes assume that Kauna’oa beach belongs to the Mauna Kea Resort, which it does not. All beaches in Hawaii are public property, so one of the reasons we did this video was to show that even if you can’t get a coveted parking pass to park in the public parking area and access the beach at the resort, you can walk in from Hapuna Beach using the hiking trail.

If you DO want to enjoy a cocktail and some lunch once you get there, the Hau Beach Bar is happy to take your money and they serve a mean cocktail (or iced tea!) steps from the beach. The staff is friendly and again, you don’t have to be a guest to enjoy ANY of the restaurants on the property.

As an aside, the bar at the Westin Hapuna Resort is also open to the public and you can see an AMAZING view of Hapuna Beach from the upstairs bar.

AND ABOUT THAT UNEXPLODED ORDNANCE IN THE HAPUNA REC AREA:
Hapuna was one of a variety of areas in South Kohala used for military exercises during World War II.

The Army Corps of Engineers conducted a $9 million sweep of the Hapuna Beach State Recreation Area between September 2011 and Jan. 31, 2012. The search resulted in the finding of several pieces of unexploded ordnance, including a live Japanese hand grenade found lying on open ground above the park.

The beach was also closed in February 2011 to investigate a cylindrical object about five inches in diameter that was observed sticking out of the sand in waters off the beach’s south end.

Beach-storming exercises were among the activities conducted at Hapuna during the war.

Despite sweeps of the area in the 1940s and 1950s, numerous pieces of ordnance keep appearing at Hapuna, including entire cases of mortars and other shells apparently dumped overboard from landing craft.

Authorities believe they may become dislodged from their resting places by storms and brought toward shore by currents.

For more information about the Ala Kahakai Trail – Map- https://www.nps.gov/alka/planyourvisit/maps.htm