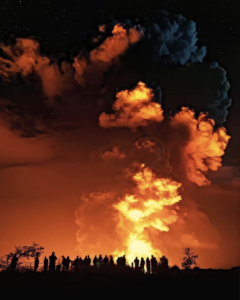 Last night, Kiluea erupted with amazing steam and sulfur plumes shooting into the air as the summit water lake was vaporized by lava. Halema’uma’u crater is, once again, aglow. The National Park Service photographers captured some beautiful images of the billowing steam with the fiery orange glow of the lava.  Facebook is abuzz this morning with flaming photos of the caldera and a mix of comments around what this means for our island.

My first thought was VOG, volcanic fog, that occurs when the sulphur dioxide pours forth from the caldera like it did for years causing some of Kona’s beautiful red sunsets, but also a haze in the air. While I was bemoaning this aspect of the eruption on social media, a long time resident cajoled me for my attitude about the nature of this island.

He wrote: “Pele is revered, respected, and Her return is widely celebrated among locals and native Hawaiians alike.” That made me change my status update from one of “Woe is us, thanks 2020!” to one of “How amazing is it that we live on a land of creation and energy?!”.

A few of my business owner friends said, “The eruption translates to people wanting to come visit, which is great for business!” Perspective, right?

Hawai’i Is An Energetic Island 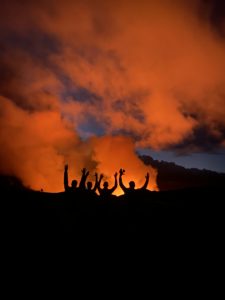 When my husband and I were filming our latest video about “The Con’s of Living on Hawai’i Island” we didn’t include living on a live volcano! (But, now we are going to at least mention it!) Some people would definitely include that aspect into their views of deciding to call our island home. Talk to us about Lava Zones and how that impacts home values, mortgages and insurance!

We DID touch on the energy of the island in our video and part of that energy is due to the fact that this island is very much alive! I spoke to some scientists who put up a “listening station” on the side of Hualalai a few years ago. (I tried to find this research on Google to no avail, but I DID attend a seminar on this research at the Natural Energy Lab in 2014). They said that our island actually hums with vibration. I asked if this “humming” could be part of why people say they feel a certain energy here and why Hawai’i Island is known as the healing island.

Scientists being scientists, they said that was ridiculous, but my metaphysical and spiritual friends, said, “Of course!”. Vibrational frequencies, people! Read more from, of all things-Scientific American: The Hippies Were Right! It’s All About Vibrations, Man.”  Many residents say they just feel good when they live here and can feel the difference whenever they leave the island, and it’s not just the Aloha! 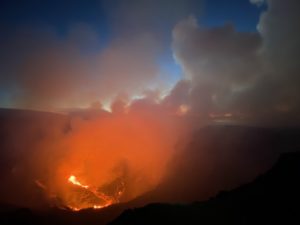 As for people running downhill screaming in fear of lava coming for their homes, do not fear. During this eruption, the lava is safely contained in a VERY large caldera in the middle of Volcanoes National Park. A perfect place to respect the cultural aspect of Pele and her work on this island AND for having science working on our side to alert visitors to sulfur dioxide levels, so we know when viewing is safe.  This is NOT 2018 with Fissure 8.

And don’t forget, that Hilo is 45 minutes from Volcano and Kailua Kona is almost two hours away, so news of impending doom for most of the island residents, is also greatly exaggerated. Instead of rushing AWAY, we actually flock TO the fresh lava at the caldera to see the glowing and molten new earth as it bubbles forth! We actually feel pretty lucky to be able to be here to see new land created! Check out this video of the lava flowing today: https://twitter.com/i/status/1341058863299117068

Benefits of Life on Hawai’i Island

When you live here, you find yourself taking your visiting friends and relatives to Hawaii Volcanoes National Park so often that you find yourself learning more about volcanology, geology and the Hawaiian goddess Pele than you ever would have suspected! You can not help but learn the stories of the various lava flows that have occurred around the island over the past 500 years. You also find that Hawai’i Island has FIVE major volcanoes: Kohala, Mauna Kea, Mauna Loa, Hulalalai and Kilauea, whose lava has flowed most often in the past 35 years. Our young island holds stories of indigenous plants and people which makes you respect the resiliency of all life here.

If you go to view the lava, please remember to wear a mask, as hundreds of people are gathering to capture the experience, as well and we want visitors and residents to stay safe for themselves and the community. 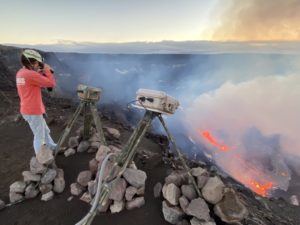 If you want a fascinating  peek into the recent history of the Halema’uma’u crater eruptions, check out this link from USGS.

We offer advice, insight, resources, connections, community and more if you are considering moving to Hawaii. Click here to join our 365Ohana.